Home to the world’s highest tides, spectacular coastline, and notoriously charming communities – the Fundy Coast is a road tripper’s dream.

Here, your capacity for wonder isn’t just filled. It overflows. This is an adventure for those yearning to connect with nature in its grandest setting. The myriad sights, sounds and smells of the bay carry you along rugged coastline and through communities shaped by the sea. You’ll experience outdoor adventures, island hopping, impressive Atlantic wildlife, and likely a lobster roll (or two). Let’s get going, shall we?

This road trip can be started from either end, but if you’re kicking things off here you’re likely coming from the "Hub City" of Moncton. Stock up on road trip snacks and head for the coast via NB-114 S. Within about 20 minutes you’ll start to see the landscape and local architecture change. You’re now in Albert County, home to New Brunswick’s most iconic landmark: The Hopewell Rocks! But before you get ready to walk on the ocean floor, explore the lovely village of Hillsborough (notably Steeves House Museum, NB Railway Museum and, for serious mountain bike enthusiasts, White Rock Recreational Area) or make a visit to Albert County Museum in Hopewell Cape.

Now it’s time to check the tide table because you’re about to explore The Hopewell Rocks and you’ll want to experience it at both high and low tides. A whopping 160-billion tonnes of seawater rushes in and out of the Bay of Fundy twice daily, and ‘The Rocks’ are the best place to experience this phenomenon. Rising and falling the height of a 4-story building each day, you can walk around giant sea stack monoliths at low tide then watch the tide rise up around them. Come high tide, you can weave a kayak around the very rocks you were gazing up at.

Heading a bit further down the coast, make a quick rest stop in Hopewell Hill to walk across the historic Sawmill Creek Covered Bridge, overlooking the vast Shepody Marshes. You’ll then come up on the village of Riverside-Albert as you make way to Cape Enrage. Birding enthusiasts will not want to miss Mary’s Point - one of the Amazing Places of the UNESCO-designated Fundy Biosphere Reserve. Now on to the incredible viewpoint at Cape Enrage, aptly named for its rocky headland jutting into the bay. Here you can zipline past a lighthouse, rappel down cliffs to a fossil-strewn beach, and have a delicious locally inspired lunch. Cover your ears - the foghorn is still active!

For your east Albert County adventures, Broadleaf Guest Ranch is a great spot for overnighting with many options for accommodations plus horseback riding tours. Rest up, there’s plenty more adventure coming your way.

Continuing west, it’s now time to experience the charm of Alma. Nestled at the entrance to Fundy National Park, there’s something about this tiny fishing community that calls people back time and again. Cosy up in a local inn, or head into the wilds of Fundy National Park - a coastal wonderland filled with pristine Acadian forest, an excellent trail system, biking and paddling rentals, and plenty of options for camping and glamping. Here, you’ll connect with nature, the ocean and the wide-open sky. Before you hit the road again, stop at one of the Outpost gift shops to pick up a little memento of your time in the park.

It’s now time to make way to the west side of the Fundy Coast Road Trip, travelling through Sussex to the rest of this world-class coastal experience.

PLAN YOUR ROUTE: Exiting Fundy National Park at the northwest entrance will lead you to the town of Sussex. From here, follow signs to the Fundy Trail Parkway to continue the road trip (about an hour south). Or, head inland to the Saint John River Valley via the Ferries & Farms Road Trip.

One of the last stretches of coastal wilderness along North America’s Eastern Seaboard, the Fundy Trail Parkway is a 30-km (19-mi.) drive hugging the coast surrounded by a 2,500-hectare park. With stunning views in every direction, you can hike, bike, or drive it. Stop and explore the many trails, waterfalls, beaches, and observation decks.

For the most extreme of adventurers, take on the four-to-five-day hiking trek that is the Fundy Footpath. Stretching from the Fundy Trail Parkway interpretive centre to Fundy National Park (or vice versa), the incomparable beauty makes the vigorous hike so worth it.

Once you exit Fundy Trail Parkway you’ll be on your way to the village St. Martins, famous for its quaint coastal charm, its two covered bridges, and red sandstone sea caves. If you’re feeling adventurous at low tide, explore the beaches surrounding the caves carved out by the force of the Bay of Fundy over 250-million years. Come high tide, the knowledgeable guides at Red Rock Adventure will immerse you in this unique marine ecosystem via kayak tour or Zodiac adventure.

Up next: You’re headed to Saint John! The only city on the Bay of Fundy, this port city has personality in spades. About 45 minutes from St. Martins, it’s a striking contrast to the fishing villages that dot the coastline. If you’re looking for top dining and nightlife, this is where you want to be when the sun goes down. Its narrow streets of beautiful and well-preserved 19th-century architecture house a melange of excellent restaurants, breweries, galleries, and local shops. Follow a self-guided historic walking tour or the Art in Public Places Walking Tour to discover many uptown treasures. While in the city, be sure to visit the historic Saint John City Market, see the power of the tides at Reversing Falls Rapids, and get a breath of fresh air at Irving Nature Park as well as Rockwood Park, one of the largest urban parks in Canada.

Festival watchlist: If you’re planning on visiting Saint John in the summer, take a peek at the Area 506 Festival schedule, featuring different events and live music performances every weekend from July 16 to August 14. Or plan to attend Third Shift, from August 19 to 22; Fundy Fringe Festival, from August 16 to 21, or Moonlight Bazaar, August 28. Check out the full list of what’s happening in Saint John!

It’s time to head on to the final stretch of your Fundy Coast Road Trip, with New River Beach Provincial Park as your first stop about a half hour outside the city. This is the perfect place to camp and explore, with gorgeous stretches of sandy beaches, sweeping cliffs, and natural history. If you’re a park lover, factor in a few nights at least. While you’re there, make the small detour to Lepreau Falls where you can buy locally caught clams to bring back to your campsite for a beach cookout.

Rounding out the western portion of New Brunswick’s Bay of Fundy is the Charlotte Coastal Region. Compared to the more rugged coastline in other parts of the bay, this area is perfect for those looking for a more relaxed getaway or an island escape.

First up, you’re off to the Fundy Isles -- a world apart from the mainland yet just a ferry ride away. Grand Manan Island is a 90-minute ride to rugged cliffs and shorelines guarded by lighthouses and teeming with birds and marine life. Campobello Island is perfect for whale-watching excursions, a stay at Herring Cove Provincial Park, and a visit to the heritage cottage and grounds of Roosevelt Campobello International Park. Deer Island has beautiful coastal vistas and excellent sea kayaking.

Back on the mainland, the beloved town of Saint Andrews anchors the region, with its pedestrian-friendly downtown filled with colourful shops and a lively wharf. Treat yourself to a luxurious stay at the Algonquin Resort, famous for being one of Canada’s historic Grand Railway Hotels. Take a trip across the ocean floor - in your car! - on the way to Ministers Island, the former home of Canadian Pacific Railway baron Willian Van Horne. And no trip to this area is complete without a whale-watching excursion in the bay, where you’ll have a chance to get close to the sea’s greatest creatures. For even more railway history, make a detour to the famous McAdam Railway Station.

The final stop on your Fundy adventure (or the starting point for our American friends) is St. Stephen, opposite Calais, Maine in the USA. Here you’ll find a border town defined by a sweet history—it’s home to Ganong, Canada’s oldest candy company, and its Chocolate Museum.

Just a bit outside the town is Ganong Nature Park, filled with hiking trails and a sandy beach. With magnificent views of Saint Croix Island, Passamaquoddy Bay and the United States in the distance, it’s a delightful location to finish your Fundy adventure. 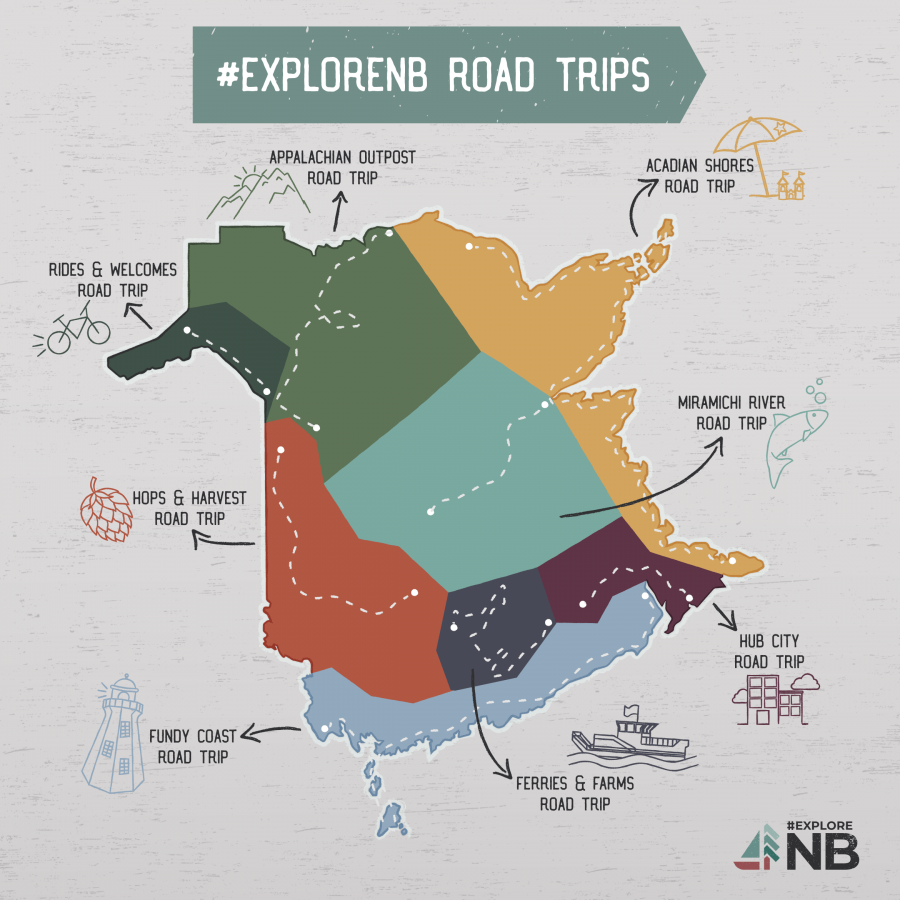