COVID-19 Advisory: Our tourism businesses look forward to safely welcoming New Brunswickers, with precautions in place to keep guests protected. Please stay up-to-date on current Public Health alerts, stick within your Steady 15 and bring your personal mask with you.

The Charlo Hatchery (CSEC) was built in 1938 and has been stocking New Brunswick rivers for over 70 years with Atlantic salmon and Brook trout. The hatching survival of salmon in the wild can be as low as 10%, however in a hatchery it is seldom less than 85%. Since 1998, 4,419,799 salmon and trout raised to various stages of development at the CSEC were stocked in the rivers of New Brunswick. The centre also undertakes projects, pilot studies and research which has touched all aspects of the fishery. For example, in 2009, 50,000 salmon eyed eggs were provided to the Nepisiquit Salmon Association’s Grand Falls incubation box project in support of the salmon fry stocking program on the Nepisiquit River. The broodfish for this project were collected in cooperation with Pabineau First Nation. 3,000 salmon early-feeding fry were provided to the Belledune Regional Environment Association’s satellite rearing facility on the Jacquet River and a further 15,098 fry were stocked in the Jacquet River. Broodfish were also collected. 7,000 smolts, 7,326 parrs and 6,800 feeding fry were stocked in the North Charlo River and broodfish were collected.The enhancement facility is comprised of a broodstock holding and spawning building, egg incubation area, upwelling boxes and tanks for early rearing and outside rearing ponds for rearing fingerlings, parr and smolts. We welcome you to come for a tour and see what it’s all about! 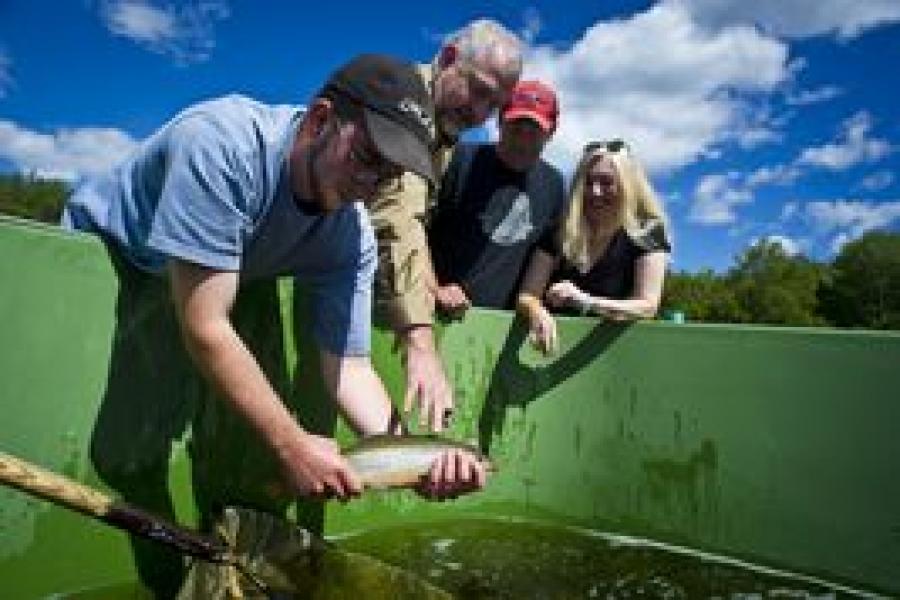